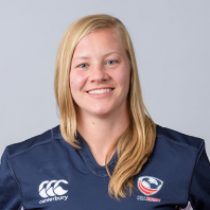 Joanna Kitlinski picked up rugby when she was 18 after a college roommate encouraged her to attend a practice. Through high school, Kitlinski ran track and cross country for four years.

Easily adapting to rugby in college, Kitlinski became a Collegiate All-American in 15s from 2010-11 before moving on to compete in the Women's Premier League where she won a national championship in 2014 and 2015 and was named an MVP in 2015.

Following her second national championship, Kitlinski earned her first cap with the U.S. Women's National Team 15s in July of 2015 against Canada. From there, she was named to the 2017 Women's Rugby World Cup team where she helped the Eagles finish fourth.

Kitlinski is able to play in the back rower as well as hooker and is fluent in polish and has a Bachelor's Degree in Psychology.

She heads into the 2019 Women's Rugby Super Series with 8 test caps.