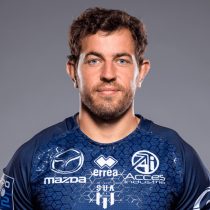 Trained first at RC Metz then in Dijon, he joined ASM Clermont Auvergne in 2009 where he played with the junior team.

On 21 January 2011, he played his first professional match against Saracens in the Heineken Cup. He made his French international debut as a first half replacement for Clément Poitrenaud in the Six Nations loss to Wales on 17 March 2012.

Buttin signed a three-year deal with Lyon ahead of the 2017/18 season.