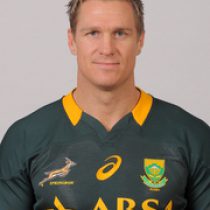 The experienced midfielder took on the captaincy of the Bok team in 2012 after leading the Stormers to top place in the Super Rugby log, and has also taken on a new role at outside centre.

Having burst onto the international scene as a wing De Villiers settled at inside centre alongside Jaque Fourie, but shifted to No.13 under coach Heyneke Meyer.

A hard runner and solid tackler, De Villiers is one of the most consistent centres in the world.

He looked destined to lead the Springboks to the 2015 Rugby World Cup, however, in 2014, while playing against Wales in Cardiff, De Villiers suffered a horrendous knee injury threatening to rule him out of the tournament.

He underwent an extensive rehabilitation process in order to be considered for selection and was announced as captain in Meyer's 31 man squad.

Unfortunately after an illustrious international career, 2 games into the World Cup De Villiers injured his jaw and retired from international rugby.

In November Jean de Villiers decided to have another crack at European rugby as he signed for the Leicester Tigers.