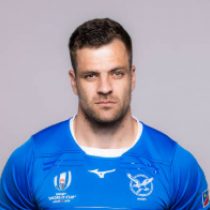 A big midfielder, Greyling, is at his second stint at the Falcons in South Africa. In between his two spells he played for Tuks in Pretoria and Wesley Old Boys (Ireland). He made his test debut in 2014 and will represent Namibia in the 2015 World Cup