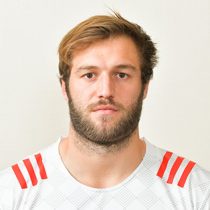 After finishing high school, Jenkins established himself in the Blue Bulls Under-19 squad.

In 2015, he was named in a 37-man South Africa Under-20 training squad and appeared for them as a replacement against a Varsity Cup Dream Team.

He then played for the Blue Bulls Under-21s in the 2015 Under-21 Provincial Championship Group A, but was also named in the senior squad for the 2015 Currie Cup Premier Division.

In June 2017, the Bulls lock was confirmed to have signed for Japanese side Toyota Verblitz.

November 2017 saw him being named Super Rugby Forward of the Year at the Blue Bulls awards ceremony.

Jenkins featured in all 15 of the Bulls Super Rugby matches and scored 4 tries.

He headed into the 2018 Super Rugby season with 28 caps for the Bulls and 5 tries.

In May 2018, Bulls confirmed that Jenkins signed a new deal to remain with the club until 2019.

Later that month Jenkins received his first call-up to the Springbok squad for the 2018 June Internationals.

In March 2021, it was announced that Jenkins would be joining Munster on a one-year deal.