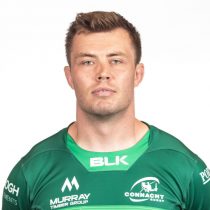 Born in September 1988, Cannon is an industrious lock forward with a huge work rate around the park. Cannon's professional career began with Northampton Saints before he joined London Wasps in the summer of 2010.

James is Irish qualified through his paternal grandparents from Donegal.

After an exceptional season with Wasps, the Irish qualified locked was released by the Premiership side to join Connacht for 2016/17. The English-born lock joined Connacht in September after six seasons with Premiership side Wasps.

He also agreed terms on a deal to stay at the Sportsground until at least the summer of 2019.

Cannon entered the 2018/19 PRO14 season having already made over 30 appearances in the competition for Connacht.