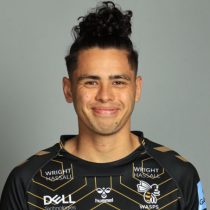 The son of Mike and nephew of legendary New Zealand centre Tana, Jacob attended Northowram Primary in the Yorkshire town before going to St John’s Primary and Kenilworth Secondary School.

He has since gone on to complete his academic studies in Leicestershire while progressing his rugby education within the Wasps’ academy.

During this time Jacob won England honours at Under-18 and toured South Africa with his country’s Under-19 squad in August 2016.

The utility back represented his country at u20 level in 2016 and 2017 while at the Wasps Academy.

In 2018, Umaga was loaned to New Zealand Provincial side Auckland to boost his game-time opportunities as part of his new academy contract at Wasps.

June 2019 saw him become the eighth player to make the step up into Wasps' first-team ahead of the 2019/20 season.

November 2019 saw him sign a new first-team deal with the club after 13 first-team appearances.

Umaga starred for Wasps after signing his first senior deal with the club and in January 2020 he was called into the England squad ahead of the 2020 Six Nations.