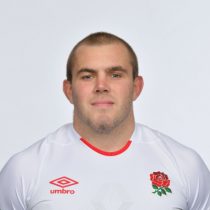 Jack played rugby at Oaklands College and St Albans before joining the Saracens Academy set-up where he progressed from the Under 16s right up to becoming captain of the Under 18s.

He joined the Warriors Academy in 2014 and featured for Worcester Cavaliers during the 2013/14 campaign.

In the summer of 2015, the youngster had a spell at Saracens RFC in New Zealand before returning to play his first senior game in a 2015/16 pre-season fixture against Saracens.

In the 2015/16 campaign, Singleton was dual registered with Nottingham Rugby, while also impressing for Worcester Cavaliers before earning a call-up for England Under 20s.

He stole the show in the Six Nations with a magnificent four-try performance as England beat Italy 42-7 and later helped them to the World Rugby Under 20 Championship title in June 2016.

In March 2017, Singleton was promoted to the Worcester Warriors first-team following an impressive campaign in the blue and gold.

His impressive campaign saw him named as the Club's Young Player of the Season before being called up to an England training camp - and he was subsequently picked for England to take on the Barbarians at Twickenham.

He was then called up for England's tour of Argentina in June but despite being named on the bench for the two Tests in South America, he didn't get on for his first international cap.

Singleton was called up to the England squad for the 2019 Six Nations.

He played against the Barbarians in an uncapped match at Twickenham ahead of touring Argentina and South Africa with the national side in successive summers.

In April 2019, he signed a three-year contract with Saracens, replacing Toulon-bound Christopher Tolofua in the squad.

July 2019 saw him get named in England's training squad for the 2019 Rugby World Cup.

Singleton secured a place into the England squad for the 2020 Six Nations after Luke Cowan-Dickie had to drop out.

In March 2020, Singleton joined Gloucester on a season-long loan for the 2020/21 campaign.