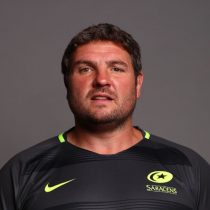 As a player, Peel made 122 Premiership appearances for Newcastle going on to coach the Falcons’ Academy side in his first position away from the field.

He also had stints with National One side Tynedale and at Sedbergh School and Barnard Castle – both renowned rugby schools that have produced a number of England internationals.

Peel moved into coaching after his playing career and built a reputation as a fine coach with the England u20s side for two years, firstly as an assistant, and won the Junior World Championship in successive years (2013 and 2014) as well as reaching the 2015 final.

He also led England to the 2015 U20 Six Nations title having finished runners-up the season before. Peel served as scrum coach for England’s 2016 Six Nations campaign while also joining Saracens’ backroom staff on a permanent basis.

Peel, alongside Alex Sanderson and Joe Shaw, headed to New Zealand in 2017 to further develop their knowledge and his set-piece defence ideas were used by Super Rugby franchise Crusaders in their final victory over the Lions.

Set-piece is a key part of Saracens’ game and Peel has been instrumental in the club’s success at the line-out and scrum time.