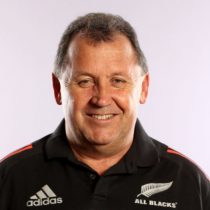 A celebrated first five-eighth, he swapped his boots for a coach’s whistle and started his coaching career as the Chiefs Technical Advisor before moving into Assistant Coach and coaching the Chiefs for eight years (2004 – 2011).

Foster was also co-coach of the Junior All Blacks (2005-07 and 2009) before being appointed as All Blacks Assistant Coach in 2012 alongside head coach Steve Hansen.

As part of the All Blacks coaching team, Foster has overseen many triumphs, including the unbeaten 2013 season, victorious RWC 2015 campaign and 2016’s record-breaking consecutive wins streak.

In May 2017, he recommitted to New Zealand Rugby through to the 2019 Rugby World Cup, alongside Forwards Coach Mike Cron.

December 2019 saw him being named Steve Hansen's successor as All Blacks head coach.

Ian Foster's game in charge of the All Blacks was a 16 all draw to Australia in Wellington but his side managed to bounce back to beat Australia a week later. The All Blacks suffered back-to-back Test defeats for the first time since August 2011 going down 24-22 against Australia in their fourth meeting of 2020 before suffering their first ever defeat to Argentina losing 15-25.

The All Blacks won their final game of the year against Argentina 38-0 as Forster finished the year with a 3W-1D-2L with a 50% win ratio.