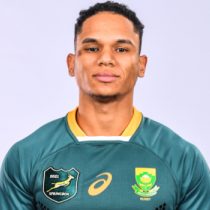 He went onto represent UWC in the Varsity Shield and was named on the Varsity Cup Dream Team to face the U20 Springboks in 2017.

Since then Jantjies has been involved with both the Stormers and Western Province.

In November 2017, Jantjies signed on a short-term loan with Scarlets, who had an injury crisis at the time, for their clash with the Cheetahs.

He was named in the Stormers wider training squad for the 2018 Super Rugby season and looked to make his debut in the competition after representing Scarlets.

The young halfback enjoyed a stellar full rookie season in Super Rugby scoring five tries and made 15 appearances, mostly in the starting line up.

His form in the competition earned him a call up to the Bok alignment camp ahead of the Rugby Championship.

Jantjies made his test debut in the starting line up against the Wallabies at Ellis Park on 20 July 2019 and scored two tries in a 35-17 victory and became the first Springbok scrumhalf to score two tries on debut.

Scored his third test try in his second test, in the 16-16 draw against New Zealand in the 2019 Rugby Championship, making something out of what appeared to be nothing.One of only three Springboks this century to score more than one try on debut and the first since team-mate
Sbu Nkosi in June 2018.

He was selected for the Springboks Rugby World Cup squad and came off the bench against New Zealand, Italy, Canada and Japan. He started against Namibia. Unused in the semi-finals against Wales.

He also came off the bench in the Rugby World Cup final against England as the Boks went on to win the title.

In March 2020 he signed a two-year contract extension with Western Province Rugby.

He returned to the Springbok squad for the tests against Georgia and the British & Irish Lions with 10 test caps and four tries. He turned out for the South Africa A team who managed a 17-13 victory over Warren Gatland's charges.