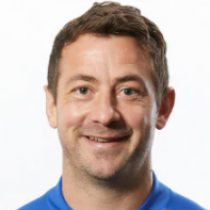 There is a rich rugby tradition in the Laidlaw family, and scrum half Greig is the next international off the family‘s famous conveyor belt, following his legendary uncle, Roy Laidlaw. Laidlaw made his New Zealand debut off the bench against New Zealand in 2010, replacing team mate Mike Blair.

His natural position is scrum-half, but he has often covered the fly half position and kicking duties for both club and country. He marked his first Scotland start in style, scoring all of Scotland’s 13 points, try, conversion and two penalties in their 2012 Six Nations defeat against Wales.

Like so many of his teammates, he has also represented Scotland at 7’s, winning eight caps, including appearances at the 2008 Edinburgh Sevens tournament. Prior to joining Edinburgh, Laidlaw played for Jed-Forest. He made his professional club debut in 26 in a league game against Leinster. The scrum-half, who has also represented Scotland at A and U-21 level moved onto new pastures when he joined Gloucester for the 2014/15 Premiership season.

In July 2016, Laidlaw was appointed as the captain of Gloucester for the 2016/17 season before confirming that he would be leaving the club at the end of the season to join Top 14 club Clermont Auvergne. He won the European Challenge Cup with Gloucester against Edinburgh at Twickenham in 2015.

In February 2017, he helped Scotland to beat Ireland in Murrayfield in the Six Nations scoring 12 points before injury ruled him out of the remainder of the tournament. Later that year he was called up the British & Irish Lions squad to replace Ben Youngs who withdrew from the tour due to family reasons.

As Scotland's second all-time points scorer (714), Laidlaw announced his international retirement in December 2019 having captained Scotland more than any other player (39 of his 76 appearances).

Laidlaw's contract at Clermont was not extended with the scrum-half signing a deal in July 2020 to join Top League side Shining Arcs on an undisclosed multi-year deal.