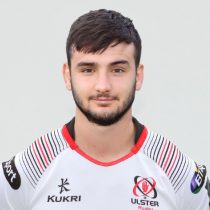 A strong, powerful looseforward, Greg Jones attended the St Andrews College and was named on the 30-man Ireland U-20 Rugby Six Nations Panel for the 2016 World Rugby Championship.

After his time with the Irish u20s Jones went on to make Ulster debut and by the end of the 2018/19 season, he made 11 PRO14 appearances.

It wasn’t until the beginning of the 2019-20 season he started to feature more regularly with Ulster thanks to his solid work rate in the back row.