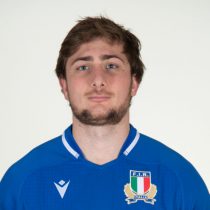 Born in Venice, Pettinelli was trained in the Lyons Venezia Mestre where he earned the call-up to the Italian national U17 and U18, and also captained the side.

His first passage took place for the Academy of Mogliano Veneto and then for the national one in Parma. In the latter, he spent two seasons competing in the Serie A championship.

In the 2015/2016 season, he became one of the fixed points of the Italian U20 national team that competed in the 6 Nations and the World Cup in England playing in all 5 matches.

At the end of the World Cup he moved to Calvisano Rugby, where he made 18 appearances and 5 tries, and then his PRO12 debut followed as permit-player with Zebre.

Despite an injury, he made 13 appearances and scored 3 tries for Zebre Rugby.

In 2018 he signed for Benetton Rugby and as of December 2019 has made 20 appearances and scored 5 points.