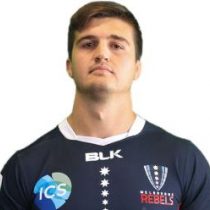 Koegelenberg played for the Boland Cavaliers at youth level before earning inclusion in the 2012 South Africa Schools squad and made appearances against France and England.

He enrolled at the Sharks Academy and earned one cap for the Sharks XV in 2013.

In September 2017, the Sharks announced the signing of the lock on a two-year contract, having returned from side Zebre where he played five matches during the 2015–16 season, and a further 12 in the 2016–17 season.

Koegelenberg was named in the Sharks 2018 Super Rugby squad and made his debut in Round 4, 2018 against the Sunwolves in Durban.

Following 7 appearances with the Sharks, the powerful lock announced he would be signing with Australian side Melbourne Rebels for the 2020 Super Rugby season.