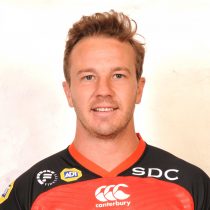 An immensely talented fly-half Zeilinga went on to make his senior Sharks debut as an 18-year-old in 2011 Vodacom Cup.

Blessed with a maturity well beyond his years, Fred made the step up to senior rugby with consummate ease and earned his first Super Rugby and Currie Cup caps in 2013.

In May 2015, Zeilinga signed a contract to join Bloemfontein-based outfit the Free State Cheetahs.

Since joining the Cheetahs Zeilinga has become the Cheetahs first choice pivot, with attacking style of play fitting in perfectly with Franco Smith's game plan.

His stellar performances during the 2017 Super Rugby campaign lead to a South Africa A call up to face the French Barbarians in June.

Zeilinga & Neil Marais kicked well during the 2017 Super Rugby season and the pair's effort meant the Cheetahs had one of the highest kicking percentages overall.

Zeilinga departed the Cheetahs to head to Japan linking up the Canon Eagles.

He returned to South Africa in 2021 to join the Lions.