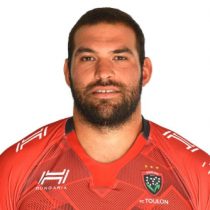 A powerful loosehead prop Fresia came through the Toulon Academy and never left since joining in 2012.

Fresia enjoyed an illustrious youth career, reaching the final of the French Espoirs Championship in 2010-11.

He broke into the senior squad in his first year at the club and has helped Toulon succeed in one of the clubs most successful periods.

Fresia lined out for the Barbarians in 2014 against Namibia, but is yet to be capped by the national team.