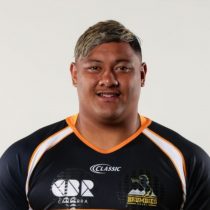 A young prop with a big future, Faalelei Sione was born and bred in the ACT.

Sione is a product of the Brumbies Pathways system, having represented ACT in age group representative teams all the way through to Schoolboys.

After graduating from Erindale College Sione linked up with local club Royals, playing for both Colts and First Grade almost immediately for his club despite his youth.

Sione was also selected to represent the Brumbies U20’s in 2015 and 2016, the Canberran dominating at set piece time.

His good form was rewarded with selection in the Australian U20’s side for the 2016 Junior World Cup, Sione earning plaudits for his performances with the national side.

Sione was picked up by the Brumbies on an EPS contract prior to the 2017 Super Rugby season and made his debut for the Brumbies against the Jaguares in Buenos Aires, coming off the bench in a big Brumbies win.

After an encouraging season, which saw him win the John I Dent Cup with Royals and make his Brumbies debut, Sione hoped for an even bigger 2018 after being included in the Brumbies 2018 Super Rugby squad.