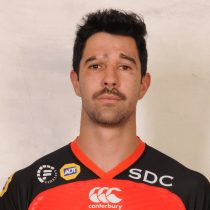 A talented sportsman from a young age, EW Viljoen was noticed at primary school level, when he was selected in the Free State squad for the Under-13 Craven Week tournament in 2008 and went to the world renowned Grey College in Bloemfontein.

He played at the Under-16 Grant Khomo Week in 2011, where he scored 18 points in two matches against Western Province and the Falcons. In 2012, he was included in the Free State's Under-18 Craven Week squad, scoring a try against KwaZulu-Natal and he played in the competition again in 2013, this time contributing a brace in their match against the Pumas.

While starring on the rugby pitch at school, he also talented cricketer featuring as a bowler for both the u17s and u19s Free State side. After being selected for the Free State U18 side at Craven Week and being selected in the SA schoolboys side in 2013, Viljoen signed a deal that saw him join the Western Province Academy. He impressed early on at his time in the Western Cape and was named in the 2014 Super Rugby squad but a knee injury ruled him out for the rest of the season.

He made his Currie Cup debut later that year in the opening round fixture against the Sharks. In March 2015 he was named in the South African U20s side for the World Rugby Under 20 Championship.

He continued to represent Western Province in the Currie Cup as well as the side's youth sides before earning his long-awaited Super Rugby debut in 2017 in the opening round against the Bulls.

Viljoen had a fantastic debut Super Rugby season and featured in all 16 of the Stormers matches and was a key member of the Western Province squad that won the 2017 Currie Cup.

Viljoen enjoyed similar success in 2018 featuring in 12 of the Stormers 16 games scoring three times and helped Western Province to the Currie Cup final where they fell to the Sharks.