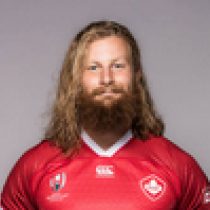 Born in Canada, Olmstead moved to Australia at the age of three and played Shute Shield rugby for Parramatta Two Blues, as well as Canadian club rugby with the Prairie Wolf Pack in Calgary.

He represented Canada at youth level before heading abroad to Australia to further his studies. He joined Australian club, Gordon RFC and played for them in the Shute Shield competition.

Olmstead made his Test bow for Canada during the 2015 Pacific Nations Cup. Strong showings in that competition led to his inclusion in the Canadian squad for the 2015 Rugby World Cup.

Following his appearance in the 2015 Rugby World Cup he became acquainted with the English club game after spending the back half of the 2015-16 season at Championship club London Scottish, earning himself a move to Tyneside on the back of some impressive performances.

Olmstead joined the Falcons in July 2016 following his country’s summer international program. Scoring in his first three pre-season appearances for the Falcons, Olmstead impressed during his maiden campaign and featured for Canada throughout their 2016-17 international campaign.

In 2018, he left the Falcons and agreed on a deal with Auckland Rugby, helping the team win New Zealand’s Mitre 10 Cup final.

February 2019 saw him sign a deal to return to the Falcons, he was unable to help the Falcons retain their Premiership status.

He was included in Canada's Pacific Nations Cup squad with 27 test caps ahead of the competition and looked to feature in his second World Cup after making two appearances in the 2015 World Cup.

Initially arriving at the club as a medical joker, the Canada lock signed a new deal with French side Biarritz until 2022.