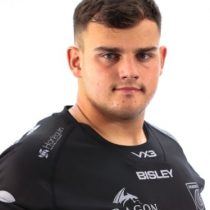 An emerging front-rower who has enjoyed a rapid rise to the starting jersey at Dragons.

Having earned his dues at Ebbw Vale, Cross Keys and Bedwas and represented Wales at under 20 level in 2017 and took part in the under-20 Six Nations.

He made his Dragons debut during the 2016/17 season and by June 2020 he had 19 caps for the side while pushing up the pecking order and catching the eye of the national selectors.