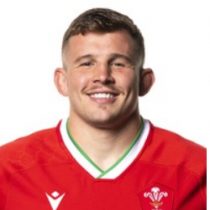 Elliot Dee came up through the ranks of the Dragons’ Principality Premiership Clubs to become a permanent member of the senior squad. Before his time in the Dragons Academy, Dee played for Newbridge RFC as a young boy and went onto the play for Newbridge School, before Penallta RFC. Following this he featured for both Wales’ U18’s and U20’s teams.

His line out throwing is one of his main attributes, Dee is an abrasive ball carrier and threat around the park. In October 2017, he was included in Wales' 36-man squad for the November International matches & he also signed a long-term contract at Dragons.

Dee came off the bench against Georgia to make his test debut and earned his second test cap two weeks later against South Africa.

Newport-born Dee did start an electrical apprenticeship when he was younger, but soon turned his focus to rugby and has reaped the rewards. Dee featured for Wales at Under-18s and Under-20s level.

Since his test debut, Dee has been a regular in the Wales squad earning 29 test caps and earning a place in Wales' World Cup squad that finished fourth in Japan.