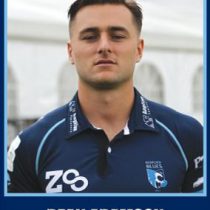 The Bedford native came through the Bedford academy but he spent time at Ampthill Rugby club notching up a seasons high of 22 tires earning him the title of most prolific try scorer in the National Two South division.

After a trial period in the pre season with the Blues his position was made permanent in the 2014/15 pre season.

The young left wing who has pace to burn took every opportunity to pass him cementing himself in the Blues side.

A permanent move came during the following summer of 2015 and Adamson seized the opportunity with both hands and took the chance to prove what a special talent he is.

In 2019, he left Bedford to join French Pro D2 side Rouen, where he scored five tries from 11 appearances for Richard Hill’s side before returning to Bedford Blues in August 2021.