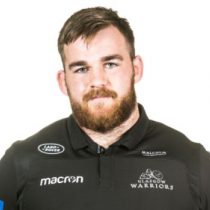 A former pupil at Marr College, he has also played for Glasgow at under-16, under-17 and under-18 levels and also for Glasgow South.

A qualified community rugby coach, Rae has already represented Scotland at under-17, under-18, and under-20 level.

Playing his club rugby for Ayr RFC, Rae was a member of the side which won the Bill McLaren shield, league, and cup for the club.

He joined the Warriors front row for the 2013/14 season and spent loan periods with Treviso and London Scottish.

An uncapped prop then, he was named in the Scotland Summer Tour Squad in May 2017 by head coach Gregor Townsend, a call-up that later saw him being included in Scotland's 40-man squad for the 2018 Six Nations.

Rae finally made his test debut against Ireland as he came off the bench in the 68th minute.