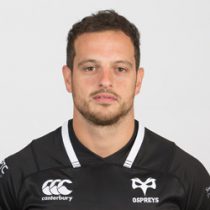 Dan Evans was educated at Amman Valley Comprehensive and went on to Trinity College, Carmarthen to study Health & Exercise Sports Studies. Dan made his debut for the Scarlets in 2007 as a substitute against Connacht in the Magners League. He has gone on to make 74 appearances for the Scarlets including 57 starts and has been an important squad member particularly in the RaboDirect PRO12.

In 2009 Dan earned international from Wales as he was named in Wales’ squad for their North America tour. He won two caps on that tour, starting both games and making his debut in the 32-23 win over Canada but has been overlooked since.

2014 saw Evans link up with the Ospreys, featuring in every single PRO12 game in two seasons. In June 2016, he became the 18th player to commit their futute to the Ospreys by agreeing on a three-year deal.