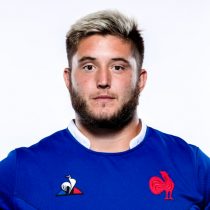 Baille burst into the Stade Toulousain's training squad in 2009. It was not until 2012 that he made his debut in the Top 14.

Being a strong and mobile front rower, Baille was given the opportunity to represent his country at the under 20 Six Nations in 2013.

In 2015-16, Baille continued his promising career by totalling 22 games for Toulouse.

The Toulouse loose-head earned his first cap as a replacement against Samoa in November and made such an impression that he was named in the starting line-up against Australia the following week.

Strong in the scrum, Baille also played a big role defensively, making 22 tackles during his three outings in the autumn series.

Baille was included in the Six Nations squad for 2017 and started all five games for France.

His consistency for Toulouse saw him being included in France's Rugby World Cup campaign where he made 4 appearances and took his test cap tally to 17.

He went into the 2020 Six Nations with 5 caps in the competition, all of which coming in the starting line up.