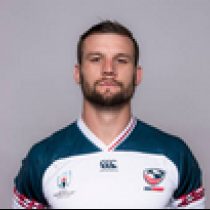 Dolan joined Northampton Saints in December 2013 and made his senior debut for the English Premiership club against Leicester Tigers in the LV=Cup in January.

As a college freshman, Dolan was named captain of the USA Men's U20 team at the 2009 World Rugby Trophy, earning his first cap with the USA Rugby Men's Eagles on June 19 against Fiji in Japan.

Following successive starts for the Eagles in 2013 and 2014, he signed a contract with the Northampton Saints of the Aviva Premiership before jetting off to join Cardiff Blues for the 2015/16 season onwards.

In January 2017, he was named in the USA squad for the 2017 Americas Rugby Championship.

In May 2017, Dolan was named in the USA Men's Eagles squad for the Emirates Airline Summer Series and Rugby World Cup 2019 Qualifiers this June and July, having won 23 caps to date.

Cameron left Cardiff in the summer of 2017 after only making five Pro12 and European starts in two seasons.