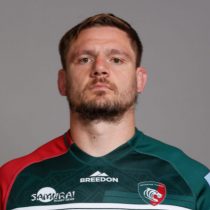 Originally from Norwich, Green came through the Tigers academy, leading the team as captain in his final year before moving into senior rugby and made his senior debut for the club at the end of the 2008/09 season as a teenager.

Despite not being 20 at the time, Green also played for the Leicester Tigers side in their 2009 friendly against South Africa at Welford Road.

After a spells with Nottingham and Yorkshire Carnegie, he joined Newcastle in 2014.

Green pledged his future to Newcastle Falcons by agreeing newly-extended contract until the 2017/18 season. Green has since become one of the leading second rowers in the Premiership making more than 100 first-team appearances for the Falcons.

In April 2019, Leicester Tigers confirmed that Green would return to the Tigers ahead of the 2019/20 season.