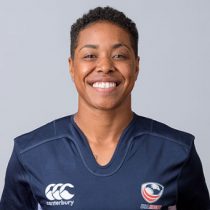 Bui Baravilala picked up rugby at age 15 after her dad -- who played all his life - setup a boys and girls club (Aliamanu All Blues) knowing the potential his daughter and her friends had to excel in the sport. Baravilala is a well-rounded multi-sport athlete having played softball, volleyball, basketball and soccer for many years, as well as ran track and field for a year.

She was both a varsity soccer and basketball player in high school, earning MVP honors for basketball as a sophomore and even being named to All-Star teams in basketball and volleyball. Rugby is in her blood, however, as even her Great Grandfather played for Fiji's national team.

Baravilala earned her first cap with the Women's Eagles Sevens at Dubai 2012 and was named MVP in just her second tournament at Amsterdam Sevens and has had the honor of being captain of two World Series stops.

In July of 2014, Baravilala earned her first cap with the U.S. Women's National Team 15s during Women's Rugby World Cup 2014 against Wales. In 2016, Baravilala she was named to Team USA's roster for the Olympic Games Rio 2016.

She has been recalled to the squad for the 2019 Women’s Rugby Super Series and heads into the competition with 6 caps and has featured in 10 World Seven Series.