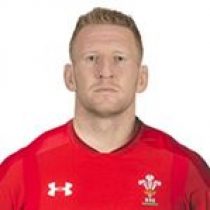 The massively framed Bradley Davies, 6’6 18 stone, uses his height and weight to great effect in both the line out and in open play. Davies has particularly good ball skills for a lock, which are no doubt testament to his days as a fly half. Davies was captain of the Welsh under 20 side that won the 2005 Grand Slam.

The former Pontyclun RFC man made his senior Welsh debut in the 2009 Six Nations game against Scotland. In 2006, Davies signed for the Cardiff Blues and amassed 116 caps and 45 points before signing for the Wasps in 2014 where he currently has 13 caps to his name. Davies was part of the 2015 6 Nations squad for Wales and has also been included in their 31 man 2015 RWC squad.

In May 2016, it was announced that Davies will return to Wales the next season to take up a national dual contract with the WRU and Ospreys.

Davies was called into Wales RWC squad after Cory Hill failed to recover from an injury, he took his test cap tally to 66 at the end of the tournament.