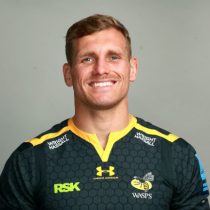 Born in the town of Masterton around 100 km north-east of Wellington, Brad moved closer to New Zealand's capital during childhood and attended Taita College in the suburb of Lower Hutt where he played first XV rugby and served as deputy head boy.

Shields made his debut for Wellington Lions aged 19 in 2010, following an eye-catching first season with the Lions & being a key member of the NZ U20 side who won the IRB JWC in 2011.

He signed his first Super Rugby contract in 2012 with the Wellington-based Hurricanes, eventually being awarded the captaincy.

A player earmarked for a big future, he was selected in the All Blacks’ pre-season 30-player training squad in May 2012 after a series of eye-catching performances off the bench for the Hurricanes and a strong ITM Cup for the Wellington Lions in 2011.

He enjoyed a breakout year in 2013, playing in all 16 of the Hurricanes games, including 13 starts and 3 tries before a knee injury hindered him in 2014, restricting him to only 6 matches.

Shields featured heavily during the Hurricanes successful 2015/2016 campaigns, playing 18 times in 2015 as the Canes finished runner-up following a 21-14 home defeat to the Highlanders. Managed to play 16 times in 2016, winning the Super Rugby Championship scoring twice in both seasons.

In November 2017, he was signed by Wasps for the 2018/19 season following his Super Rugby commitments with the Hurricanes where he had been touted for an international call up. In a very public and controversial move, Eddie Jones and England negotiated a release for Shields and included him in the touring squad ahead of the June tour to South Africa