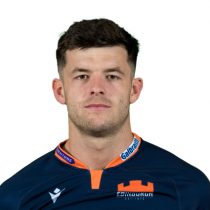 A product of Edinburgh Academy, Kinghorn, joined the club on return from the 2015 World Rugby U20 Championship in Italy.

Kinghorn first signed professional terms off the back of Scotland U20’s World Championship in 2015 and made his club debut later that season. He enjoyed a breakout campaign under Head Coach Richard Cockerill in 2017/18 and finished the PRO14 campaign with the most metres gained in the league and a place in the end of season Dream Team.

He was then rewarded with his senior international debut in Scotland’s 2018 Calcutta Cup win over England at Murrayfield and scored Scotland's first Six Nations hat-trick since 1989 in the 33-20 victory over Italy a year later.

In February 2018, Kinghorn signed a new deal with Edinburgh Rugby, committing his long-term future to the club.

Kinghorn made history in 2019 when he scored Scotland’s first Six Nations hat-trick since Iwan Tukalo in 1989, in the 33-20 Six Nations victory over Italy.

Kinghorn has also racked up 28 caps for his country (as of December 2021).

He made 106 Edinburgh Rugby appearances to date and has continued his switch to stand-off on the international stage and started at number 10 in the recent 60-14 Autumn Nations Series victory over Tonga at BT Murrayfield.

In December 2021, Kinghorn signed a new deal with Edinburgh.