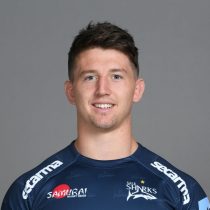 Curry, who is twin brother of Sale Sharks flanker Tom Curry, was named in the England U20 squad for the 2016/17 season, having previously represented England U18.

Local youngster and England U20 International Ben signed five-year contract at the club. Ben has made huge strides in the first team considering his age of just 18. This season, himself and brother Tom became only the fourth set of twins to play side-by-side in the Aviva Premiership.

Ben was called into the England U20s squad for the Six Nations campaign, and made a big impact when he played. He made his debut for the side against Italy, and was awarded Man of the Match.

In April 2017, Curry was one of 15 uncapped players to be named in England's 31-man squad for their two-Test tour to Argentina in June 2017.

In December 2018, Sale Sharks announced that the openside flanker signed a contract extension which will keep him in the North West until 2023.