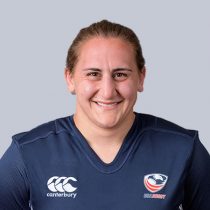 Nalbandian played rugby at Penn State where she was named the 2016 D1 Collegiate National Championship MVP and BIG 10 Forward of the Year in 2017. She was also the captain of the PSU Women’s Rugby team in 2018. She made her debut for the Women’s Eagles in 2018 at The Rugby Weekend in Chicago against Women’s Rugby World Cup Champions, New Zealand.