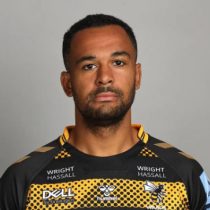 Teeside-born wing Zach Kibirige signed for the Falcons academy, having helped Yarm School win the Daily Mail Vase in 2013. Kibirige has represented his country at Under 17, 18 and 20s level.

Kibirige made his senior debut for the club against Cross Keys in the British and Irish Cup at the age of 17, scoring against the Welsh side and following it up with an 80-metre interception try against Rotherham on his league debut.

Recognised for his speed and attacking prowess, Kibirige continued to play a part in the Falcons’ cup setup throughout the remainder of the 2012/13 season before making his first appearance in the Aviva Premiership the following term against Gloucester at Kingsholm.

Despite gaining wide praise, his debut was cut short when he was stretchered off the pitch with a badly broken leg, an injury which would keep him out of the game for more than a year.

In summer 2015 Kibirige added to his international honors when he was called up to the England Sevens side for the Rugby European Sevens Grand Prix Series event in Lyon, and he began the 2016/17 campaign by dotting down in the pre-season visit of Doncaster.

Scoring the winner against Bath in the Anglo-Welsh Cup that season, he spent the summer of 2017 in New Zealand with the Sumner club.

He has become renowned for his ruthless finishing, scoring 10 tries in his first nine games of the 2018/19 season.