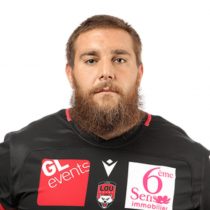 Chiocci formed part of the French U18 side that won the European Under 18 Rugby Union Championship in both 2007 and 2008.

During his 2007 season he made the move to Toulon where he competed in the second division as an academy player.

During this time, Chiocci was called up to the French U20 side where he competed in the 2010 IRB Junior Rugby Championship.

He became a vital member of the squad and was named in the starting lineup in the 2014 Heineken Cup Final against Saracens which saw Toulon win by 23-6.

2014 was a big year for him, after winning the Heineken Cup, he was called up to the French national rugby squad and took part in the November tests against Fiji, Australia and Argentina.

Chiocci was not originally included Guy Noves 2017 Six Nations squad but due to the injury of Eddy Ben Arous, Chiocci was called into the squad ahead of their opener against England. Chiocci will be hoping to take full advantage of his selection and add to his single Six Nations cap and to get his first Six Nations try.

The experienced prop made 175 appearances for Toulon winning the Top 14 three times as well as the Champions Cup after over a decade with the club before he signed for Lyon ahead of the 2019/20 season.

He also made 10 test appearances for France and 40 appearances in the Champions Cup for Toulon.