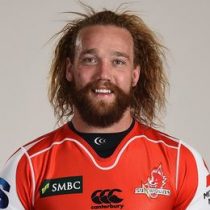 Easily identified by his Lion like hair, the utility forward started off his senior provincial rugby with Cheetahs in the 2009 Vodacom cup. Britz would go on to represent the Cheetahs and Griffons in Vodacom and Currie Cup rugby until he signed up with the Lions midway through the 2012 Currie Cup.

Willie has gone on to represent the Lions in the Vodacom Cup, Lions Challenge, Currie Cup and helped the franchise secure Super Rugby status for 2014.

He was then included in the Lions squad for the 2014 Super Rugby season and made his Super Rugby debut in a 21–20 victory over the Cheetahs in Bloemfontein.

Willie joined the Cheetahs from the 2015 Super Rugby season on a one-year deal, while also signing for Japanese Top League side NTT Shining Arcs.

In 2016, he did not renew his Cheetahs contract but decided to take up an offer in Japan's Super Rugby side, the Sunwolves.

Britz has made 18 appearances, scoring 10 points for NTT Shining Arcs as he heads into the new Top League season.