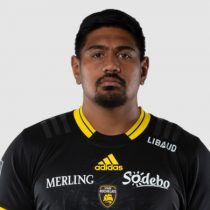 Born in New Zealand to parents of Samoan descent, Will is the cousin of former All Black lock Brad Mika. Following a growth spurt in his teens, Will made the most of the opportunity to try rugby union, playing his first game at lock at the age of 15, and enjoying both codes through the remainder of his school years.

After joining Sydney University at the age of 18, he was part of the Colts second XV that won the 2010 Grand Final. His athletic ability and raw talent saw him pick up a spot in the Waratahs Academy in 2011, straight out of school, and these growing skills and imposing physique quickly made him a stand out.

After a promising first year, a fractured foot sustained whilst playing for the Sydney-based National Academy side against the Brisbane National Academy in February 2012 forced him to take a year out from playing, confining him to the gym for the remainder of the year.

The mammoth lock earned his first Test cap in the final Test against France in 2014 and made an immediate impact.

Capped 18 times by the Wallabies and captaining an Australian XV against the French Barbarians, Will joined Saracens on a short-term deal in December 2016.

In an eye-catching stint at Saracens, he slotted into the reigning European and English Champions side with impressive ease, with his bulldozing carries, offloading game and committed defence endearing himself to the Saracens faithful.

He re-joined Saracens ahead of the 2017/18 season on a two-year deal. Skelton earned many plaudits in 2018/19 and was named in the BT Sport Dream Team of the Season.

He continued to impress with the club and re-signed until 2021 but following the club's relegation to the Championship, he left the club to join TOP14 side La Rochelle.

Skelton made 77 appearances for Saracens in his four years at the club winning the Champions Cup twice, the Premiership three times and was nominated as the Saracens player of the season.

He has made 2 appearances for the side as of September 2020.