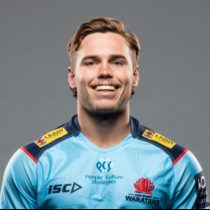 Kingsford born and bread Will Harrison attended Marcellin College which is well-known for rugby league. He is a product of the same Sydney school in Randwick as former Wallabies coach Michael Cheika.

He was named in an Australian Barbarians team in 2016 but missed trials for the Schoolboys squad because of an ankle injury. Despite this, selectors were so impressed by his performances for Randwick once he had fully recovered they named him as the team's skipper.

He became the youngest player to sign a professional contract with the NSW Waratahs and is regarded as one of the game’s most promising young talents. A No 10 who can also play at inside-centre and fullback in the 15-man game, Harrison trained with the NSW Gen Blue U20s squad in 2017 before signing a three-year deal with the Waratahs in 2018. An all-round athlete, who has also excelled in beach sprinting, winning a state gold medal in the discipline.

Harrison joined the Waratahs' training squad in 2018 and spent his first two seasons at the side behind the likes of Kurtley Beale, Bernard Foley and Karmichael Hunt

He guided the Junior Wallabies to the final of the U20 World Championship in 2019 with his continued fine performances seeing him become a full time Waratah in 2020.

Having spent the 2019 season behind Bernard Foley at the Waratahs, Harrison was trusted with the starting 10 jumper for the season opener in 2020.

He would start all six of the Waratahs' game before the season was called off due to the global pandemic.