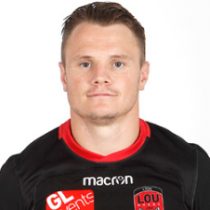 Educated at Otorohanga College, Arnold burst onto the scene in 2009 when he was selected for Sir Gordon’s national sevens squad, becoming a lynchpin in the side along with the likes of captain DJ Forbes, Tomasi Cama and Tim Mikkelson.

Part of the gold-winning team at the 2010 Commonwealth Games in Delhi, India, Arnold was also part of the side’s World Series success between 2010 and 2012.

Arnold made 41 appearances for the Bay of Plenty Steamers from 2009-2013 and contributed to the success of the NZ Sevens side.

A lengthy stint on the side-line had Arnold looking to the future – turning his back on an Olympic sevens dream by signing a two-year deal with French side Lyon.

Arnold enjoyed a fine try-scoring campaign during the 2016/17 season, crossing the whitewash on 8 occasions in the TOP14.

The Kiwi outside back has continued to shine for Lyon scoring 12 and 9 tries respectively in the two seasons that followed and heads into the 2019/20 Champions Cup season with 5 European caps.