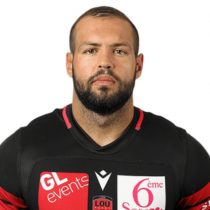 Effective, efficient and consistent, Thibaut Regard has been a regular in the Lyon set up since breaking into the squad in 2014.

The hard-working centre is a fan and squad favourite in Lyon and is known to be the last man on the training pitch.

Regard arrived at Lyon at the age of 15 and earned selection for the France u18 due to his form at the Lyon Academy.

Regard helped the side gain promotion to the Top 14 and played a major role in Lyon's 2017/18 season making 26 appearances in the TOP14 as they booked a place in the playoffs for the first time and helped them qualify for the Champions Cup.

Regard heads into the 2019/20 season 22 European caps and is currently contracted to the club until 2021.