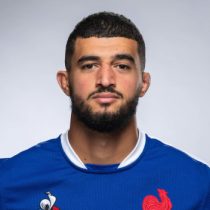 The rangy French-Algerian second row joined the club in the summer of 2015.

After a year in the academy, Rebbadj progressed to the senior squad for the 2016-17 campaign due to a host of powerful performances in the engine room.

Standing at 6 foot 7 and 112 KGs, he is a force to be reckoned with, and has shown he is a willing ball carrier and has made a big impact stealing opposition ball at lineout time.

He played 13 times in the 2016 season for the French giants & is one to keep a close eye on as he continues to progress.

In September 2017, Rebbadj signed a two-year deal with Toulon to reward his step up from the academy side.

By the end of the 2018 Top 14 season, he had amassed 55 appearances for the French giants and had scored 10 points.

After a number of solid performances for Toulon, Rebbadj earned a test call up in November 2020.