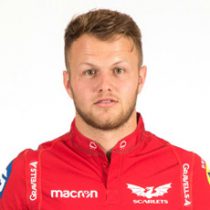 Hughes is a former Wales U20 representative, previously captaining the side in 2014 U20 Six Nations. He was part of the 2013 JWC Wales team that lost to England in the final of the tournament.

Hughes made his debut for Scarlets in 2014 having come through the academy system. In early 2015, he suffered a long term knee injury that kept him sidelined for a lengthy period.

The centre has worn the Scarlets captain’s armband when club captain Ken Owens was on international duty, establishing himself as a regular in the Scarlets midfield.