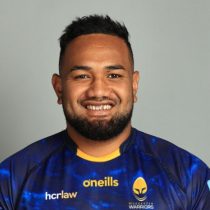 Vailani operates primarily as a No. 8 and made his Test debut for Tonga against Japan in November 2017.

The back-rower is a strong ball carrying forward with a background in the 7s format, during his previous four years spent in Japan.

Vailanu has played four times for Tonga, which included a try at Millenium Stadium in their recent Autumn International against Wales.

The Tonga powerhouse Sione Vailanu joined Wasps from Saracens in 2019.