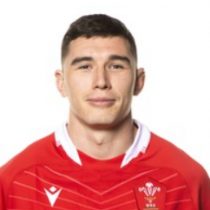 Seb is from the Whitchurch area of Cardiff, he played his junior rugby for Pentyrch RFC before being called into the Blues age grade system and has been capped by Wales at Under-18 level.

He made his debut for Cardiff Blues during the 2014/15 season when the region defeated Scarlets in November in the LV=Cup.

Davies won his first Wales cap in 2017 to the surprise of many having not started a Pro14 game for Cardiff Blues. However, he certainly proved the doubters wrong with impressive outings in the red jersey.

In October 2017, the Wales international signed a long-term deal with Cardiff Blues. He made major progress at the tail end of the 2016/17 and was rewarded with a place on Wales' summer tour, where he won two caps.

Davies made one other appearance for Wales in 2017 and was named in the Wales 2018 6 Nations squad. Later in 2018 he was included in the Wales squad for the 2018 June Tests and went on Tour with 4 test caps.

Ahead of the 2020 Six Nations, Davies was named for the Wales squad with a total of 7 caps to his name. In March 2020, the lock signed a new undisclosed deal with Cardiff Blues.

On 12 January 2022, Davies signed a new deal with Cardiff having made 90 first-team appearances since making his senior debut during the 2014-15 season and has built a reputation for his all-round ability, combining athleticism and physicality.

He has won 13 caps, featuring in all four of Wales’ recent Autumn Nations Series.