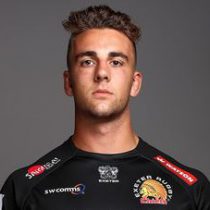 Sean is a Welsh Lock who joined Exeter Chiefs in August 2016 from Welsh outfit RGC 1404 despite numerous attempts from Gogs and Welsh Rugby Union, Sean decided it was best for him to moved to the English side.

He enjoyed loan spells with Taunton and Plymouth Albion before making his Chiefs debut in an Anglo-Welsh Cup tie away to Worcester Warriors in January 2018.

After 31 appearances for the Devon club, scoring three tries in the process, he signed a new deal to remain at Sandy Park.