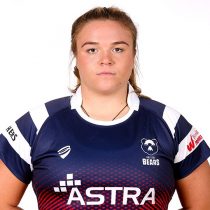 Sarah Bern started her international career with England U20 as a back row forward, but has since converted to prop where she has thrived.

After earning England U20 recognition in 2015, Sarah stepped up to full Test level against France and the USA during the International Women's Rugby Series in the USA in July 2016.

She has since gone from strength to strength, becoming a regular starter for England in the front row.

At the 2017 Women's Rugby World Cup, Sarah started in four of England’s five games, including the final in Belfast against New Zealand. She was named as player of the match for her performance in the semi-final against France.

During the 2018 Women’s Six Nations Sarah played in all five matches, scoring two tries as England finished second. A year later she started all of England’s five games, scoring five tries, as they won the Grand Slam. Her performances during the 2018/19 season saw her voted as the O2 England Women’s Player of the Year.

Born in Kingston-upon-Thames, Sarah attended the high school between her initial education at Coombe Hill in Kingston and is taking a sports strength & conditioning course at Hartpury College.

Her introduction to rugby came at 11-years-old at London Irish and after playing for Esher, Sarah joined Bristol Bears Women where she returned to after one season at Gloucester-Hartpury.

Sarah was one of 28 players offered a full-time contract in January 2019.