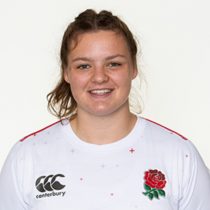 Sarah Beckett made her debut for Firwood Waterloo Ladies at just 18 years old but her sharp progress would have been of little surprise to those who know her well. She made her England debut in November 2018, starting in the Red Roses’ 57-5 defeat of USA Women at Allianz Park.

Beckett is the sister of Gloucester and England U20 back row Charlie, while her father Mark represented Waterloo first XV as did her granddad and uncle.

Rugby was always on TV at home for the Liverpudlian, with Beckett starting her rugby journey with Waterloo before captaining West Park RFC as a junior.

She attended Range High School where her hero, former England and Waterloo captain Gill Burns, was her head of house and a constant inspiration.

Her proudest moment was making her senior Firwood Waterloo debut, with her talent seeing her named captain of Lancashire and the North of England at U18 level.

The 2016/17 season would be an extremely successful one for Beckett as she lifted the Gill Burns’ Ladies County Championship and the overall Championship with Firwood Waterloo.

The back row forward would go on to make her Tyrrells Premier 15s debut for her childhood club in September 2017 in a home defeat to Saracens.

Sarah earned herself a full-time England contract in January 2019 and featured in every game of the Six Nations that year as England won the Grand Slam.

In July 2019, she signed for Harlequins Women from Tyrrells Premier 15s side Firwood Waterloo ahead of the 2019/20 season.