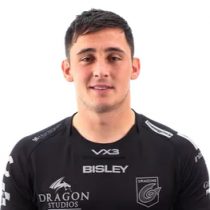 Highly prized outside-half Sam Davies - a former IRB Junior Player of the Year – is regarded as one of the brightest talents in the Guinness PRO14 and European game, with a deadly accurate left boot and incisive attacking game.

Davies was named in the Wales Under-20 squad for the Junior World Cup in South Africa for the 2012 tour and he was part of the squad in 2013 as he selected for the 2013 Under 20 Six Nations Championship. In the summer of 2013 he guided the Wales U20 team to their first ever Junior World Championship final, playing in all five games and scoring 61 points on the way to becoming only the second Welshman to ever collect the IRB Junior World Player of the Year award. He was just the second Welshman to win the award after Gavin Henson's triumph in 2001.

He continued to perform for the Ospreys and earned a test call up and made his test debut for Wales as a replacement against Australia at the Principality Stadium in November 2016. Later that month, played an integral role in the win against Japan with a dramatic last-minute drop goal.

In late November 2016, he signed an undisclosed long-term deal with Ospreys and went on to player 150 games for Ospreys before he confirmed that he would be leaving the side to join Dragons in 2019. Davies led the way in the Guinness PRO14 marksmen charts during the 2018/19 season with 148 points – including a match-winning 16-point haul against Cardiff Blues at Judgement Day VII.

By June 2020, the flyhalf had represented the Dragons 16 times scored 144 points and had scored 24 test points in 8 games for Wales.

IRB Junior Player of the Year 2013