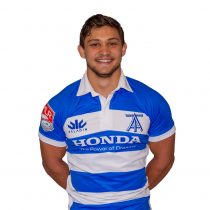 A former student at the reknowned rugby factory that is Grey College in Bloemfontein, Ross Braude played Craven Week for the Cheetahs and represented South Africa at Schoolboy level.

After school he linked up with the Bulls where he lead the Pretorian club’s age-grade sides to under-19 and under-21 championships in 2019 and 2020, respectively.

He linked up with the MLR club the Toronto Arrows in 2021. The Canada-eligible back, who qualifies for the red and white through his Canadian father, previously represented the South African under-18 sevens team before opting for Canada as his test future.

He made his test debut for Canada in the starting line up against Wales in July 2021.